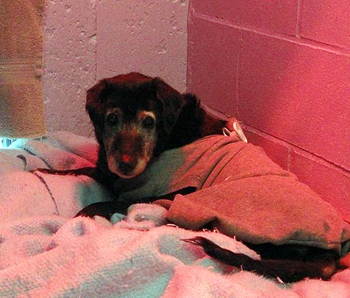 I have been visiting an animal rescue center and recently had the opportunity to work with a dog that was traumatized. She was at the center for re-homing and was lying shivering in her basket. She would not move from it and braced her feet against the side so that it was almost impossible to move her.

As she lay trembling, I talked to her and tapped using the trauma algorithm. I next used algorithms for complex trauma, anger and rage. Gradually she became a little more interested and did not tense her body quite as much.

I was able to lift her to a sitting position and then, after some more tapping, she stepped out of her bed and came with me for a walk. It had taken about 30 minutes. She was still very nervous, had her tail between her legs and pulled back when she saw another person or dog.

However, she seemed to enjoy the walk!

The next day, I found her—again—in her basket, trembling fearfully. But this time she picked up her head and looked at me, and even wagged her tail a little. It took 5 minutes to get her to step out of her bed and go outside with me. The next time I visited the center, I saw her running in and out of her outside pen and jumping up to greet people!

After that success, the staff asked me to work with another dog—only a few months old and already biting and snapping.

“He’s a challenge,” said the staffer. “Be careful of that one.”

After listening blithely to advice that I’d have to ‘lasso’ him by dropping a loop of lead around his neck, I found the dog cowering in the corner behind his bed.

I sat on the floor and focused my attention on him, using surrogate tapping to calm him. Eventually he got up and walked over to me and sniffed my hand. He went away and came back a few times, and I was gradually able to stroke his head and begin touching the tapping points on his head.

He didn’t make any attempt to growl or bite, and after a short while I was able to tap gently through the sequence and put a collar around his neck. I took him outside, although he was obviously not used to walking on a lead so I carried him some of the way and sat with him, continuing to tap whenever he seemed uneasy. He yawned the way some people do after a TFT session.

Later, one of the staff tried her own puppy in the dog run with him. And 30 minutes later, she had both puppies on leads on the grass outside the building!

4 thoughts on “TFT and Rescue Dogs”