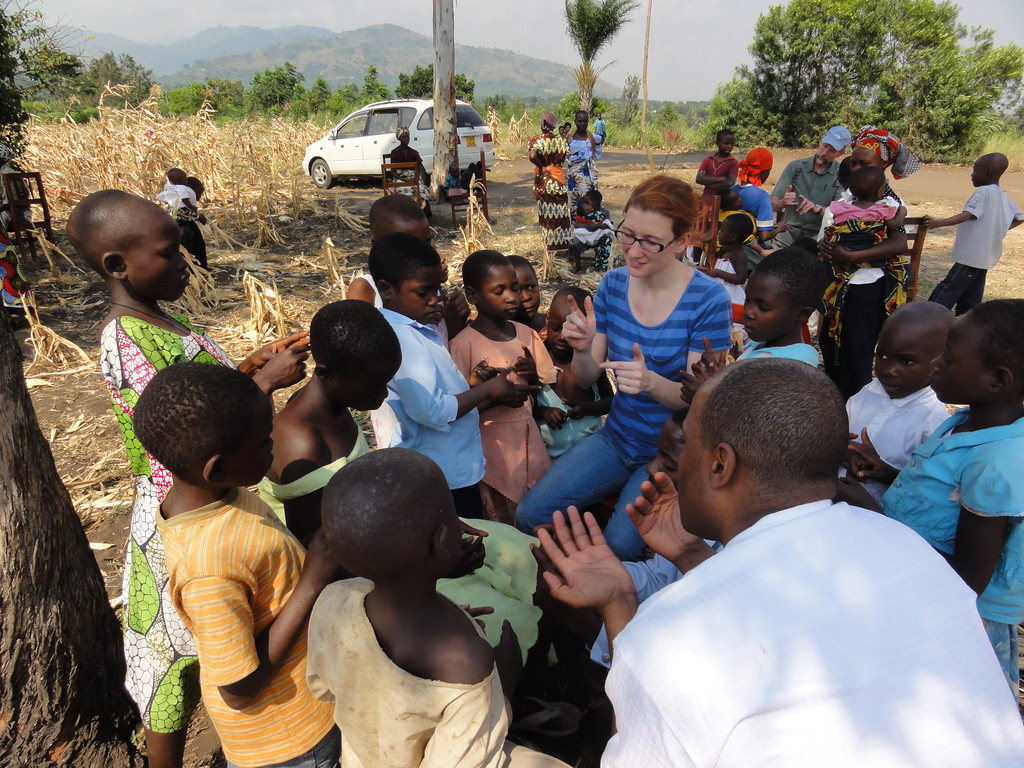 Mists of mosquito netting drape around me as I type, cross-legged, on my bed. Beyond are cracked walls and doors ajar. Any effort to make and keep parallel lines in Africa is usually ephemeral. But to do that, in the form of a well ordered scientific study of Thought Field Therapy’s effectiveness, we have come, in addition to training many people and treating dozens of others.

Beyond this room, in the haze of heat, humidity and dust, are now familiar sounds. Children shout, men laugh. There is the loud cawing of ravens, relentless hoopoe of grey doves, and the distant, throbbing hum of the hulking cement factory which towers over this gritty town of Hima. It brings meager paychecks to workers who come from all over Uganda with their separate languages and appearances. They toil in hope of better lives for their wives and children. Our sweat is small in comparison but our dreams are similar for these Ugandan peoples we have come to love.

The work of our mission is now finished, ending, as it began, in fatigue. I arrived two weeks ago at 3:15 am, a smooth landing in Entebbe, grabbed bags and passed customs to see the ever hospitable Fr. Peter waiting to “most welcome” me. It is my third trip to Uganda. Fr. Peter’s musical laugh and loving heart is a tonic, to me and to hundreds of others.

After two hours’ sleep in a guest house I meet the team at breakfast. Dr. Howard Robson and his wife Phyll are here from England. They have recently retired, he from his cardiology practice, she from nursing. We have worked together on both prior Ugandan trips. It is great to see them.

One of our most important goals is to add to the 2012 study. At that time we trained volunteer TFT counselors, who pre-tested, then treated 256 people who came admitting symptoms of PTSD. A week later they were post-tested. It was a wait-list controlled effort that involved hundreds of people. Dr. Howard directed the study and has taken charge, in his relaxed manner, of this one. We hope to bring many of those 256 back, now 18 months later, for post testing. How have they fared after their brief treatment? I’ve been wondering that with a quiet urgency ever since I left.

Phyll was the senior trainer on that 2012 trip. This time she will manage our logistics and support a new senior trainer, who has just emerged into the dining hall. Ngub Nding is a personal force; laughing, open to all and everyone, massive in frame and spirit. A former pharmacist and pharmaceutical researcher, he is now a life coach and TFT practitioner in Paris. Ngub (pronounced nGoo) is accompanied by his partner, Alexandra Maillet, a gentle kindergarten teacher from Paris who is also now practicing TFT full time, and his brother Oob (pronounced Ob as in “job”) Nding, an engineer now living in Calgary, Alberta. Ngub and Oob were raised in Gabon, West Africa.

I am Roger Ludwig, a private practice psychotherapist of many years in Cheyenne, Wyoming, USA. I’m looking forward to the arrival of the important seventh member of our team, Celestine Mitabu, who is coming by bus from Rwanda, where he is a church pastor, orphanage and school director and the senior TFT trainer there. He worked with us in 2012 and I consider him a dear friend. He, with a few others, have established a very successful TFT presence in Rwanda.

These two weeks are now a blur of images and sensations, of non-stop activity, late evening suppers, a collapse into sleep. Warm handshakes in the triple African manner; the upturned looks of curious children; handsome elders, character etched deeply in their faces; and of course our trainees, young and middle aged and old, often studious, always sincere, sometimes sleepy and bewildered like trainees everywhere. There has been lots of laughter and music, joy in life’s real joys—good company and ample, if simple, food. Yet also much suffering, children in dirty rags, fevers, swollen limbs, infants failing to grow, young men who have worked hard to achieve an education who now languish for lack of opportunity.

Suffering and celebration, all in a flow, streaming in a fast drumming rhythm, a blur of hands on skin. In the west we hide our suffering behind walls. Here it is all of a piece, open to eye and sky. Caskets on display next to the vegetables, meat and clothing.

Perhaps in the west have we also hidden, or perhaps lost our joys. Africa has taught me to recapture them.

The wedding scene typified it for me. Our team sits under a canopy among the guests of honor at the wedding of Fr. Peter’s niece Meresi Muhindo and Kule Felix, in a village at the end of a rutted track. 750 to 800 people are present, gathered around a rectangular open area of swept dirt. Directly across from us is Queen Ithungu Asimawe Agnes, Queen of the Rwenzori Region. She sits alone, radiant and regal in gracious splendor, personal attendants and muscled guards radiate in a semi-circle around her.

But also in the center of the celebration hobbles a beggar with a single crutch, pants torn off unevenly at the knees. From head to toe he is coated in thick dust, cupped hand silently reaching for alms as he slowly circles the crowd. We can see that he is developmentally disabled. But no one shoos him away. The hired security guard only moves him once, and that very gently, when he is directly in the way of dancers.

Here it all belongs. All are a part. And we have been welcomed into their lives, if only for a short time.

In comparison to previous trips this one is low budget and we have concentrated on training smaller numbers of people but training them well. (Our training budget includes providing transport and food for all trainees.) From Nsenyi, a small idyllic campus midst the lush terraced farms of the Rwenzori foothills, we trained two groups of catechists, the first of 37 and the second with 12, two days of training for each group. The plan was to train them all in Dx, the diagnostic level, after a review of the Algorithms. But it became clear that review was what they needed most.

Ngub taught with dynamism, inspiring, motivating, and at times cajoling. We kept our single blackboard busy. With few handouts, they were led to take careful notes. Practicum groups were coached.

The speed and effectiveness of TFT again inspires. Alosius translates all into Lukonjo. He is a school teacher, a catechist who translated for us in 2012. As we call TFT “tapping” for short, they are calling it “kongota,” which is literally translated as “knocking.”

We prod them into practicing post-training, on themselves and amongst the communities they serve. As catechists they conduct the mass whenever a priest is not available. And with two priests for forty parishes it is the catechists that are with their large congregations, volunteering Sundays and throughout the week. Most are men but a number of women are catechists also, well respected and included.

Between these two trainings was the research day. We gathered with the catechists, organized our work, and reviewed the administration of the checklist, all the while wondering how many of the participants would return for this 18-month post- test. So many things don’t work as planned.

But come they did, 128 of the original 256, nearly all of them carrying the cards we gave them 18 months ago, each with their identification number! Tests were read from the translation, scores recorded, checked and double checked, entered in Excel and checked again. Lunch served, transport paid. At the end of the day only one sheet was deemed un- scoreable and discarded. The data are ready for the statisticians.

Much of the credit for this goes to a man who labored behind the scenes, visiting people in their villages, telling them of the follow-up, reminding them of their importance to this study. A man we never see unless we search him out. Bless you Andrew.

After the second training we packed up and moved to Bukangara, a parish compound along the busy asphalt near the Congo border. Chairs were arranged under a few spreading trees, a chalk board propped by a table. Ringing the bell of an old truck wheel hung from a tree brought in 45 catechists. Drums and praise songs, prayer and two days of algorithm review with a little Dx added. Ngub, Celestine and I tag-teamed with everyone helping with practicums in this little slice of Eden.

Saturday is the niece’s wedding, not far away. We sat for six hours of speeches, dramatic ceremony, a comic MC, feasting and a drenching downpour met the queen and took pictures of children. And the couple still had not actually gotten married. That came later at the Bukangara church. The occasion continued until midnight.

Sunday brings us to a parish church, a hundred or two in attendance, no glass in the open windows. A few hours of song, and celebration, then mass. We are treated like royalty, sung to and presented with baskets for cassava. I give a talk introducing TFT to the whole group and we lead them through a group demonstration. By raise of hand about 60% report relief of a real problem.

Ngub offers the team up to treat any who would like. And so we do, with two teams working with English translation, one with French and one with Swahili, we treat throughout the afternoon, one after another, after another. Then we visit a medical clinic established by Fr. Peter, six rooms in a concrete and tin building. We talk with the resident doctor and staff and admire the new equipment that had arrived last week.

Then another move, this time to Hima, an hour and a half to the north. Hima is hot, 100° plus. We’re teaching outside but the trees provide only a hint of shade. Just behind our group, beyond a hedge, is a dirt street, sided with a row of small shops, one erupting with blaring music. Motor bike taxis, “Boda-bodas,” go up down. But our catechists carry on. Our trainings last long. Ngub won’t quit as long as there is one more point that can be made. 35 participate; some repeats who attended one of the first three trainings. They wanted more.

Ngub, Celestine and I take sections of this one. Aloysius keeps up, claiming to never tire.

We close our trip like we began it, with a visit to the dignified, well-traveled, knowledgeable 78-year old bishop. He has supported and endorsed our work since the first trip in 2009.

Our trip is finalized with a visit to a village between Kasese and Hima to see some real estate where the church is willing to site a TFT center. One building is present, used in part as a small class room and a place for traveling catechists to stay, but it can begin use now for Kongota treatments. It sits near the Catholic Church and the Anglican, and near two busy schools. They envisage a national TFT center someday with local trainers.

Now, at the close of our work, RAIN! From the stoop I watch a hundred thousand silver rivulets streaming from the corrugated roofs. Fresh, clean, invigorating. Billowing in gusts. Cooling and washing away the day’s heat, the dust, the petty frustrations. Here rain following an event signifies heaven’s blessing. May these seeds of TFT grow in this rich, Uganda soil, amongst these generous, kind people.

*excerpted from Tapping for Humanity, Spring 2014