For many veterans, the last battle is still being fought long after they retired their uniforms. In too many cases the final action ends by taking their own lives. Current statistics reflect that twenty veterans take their own lives each day of the year. My personal experience and encounters with other combat veterans lead me to believe that most carry some degree or piece of the last battle that has not been put to rest. Accumulated past or bad experience stressors may result in hyper-vigilance, anger or guilt brought on by a thought, smell or dream.

As a recipient and now a provider of TFT, I see the positive results of this modality on a daily basis. The following case study is only unique in that the administration of the treatment occurred from a distance of hundreds of miles between the provider and recipient. This review also provides the perspective of the treatment from the viewpoint of each participant.

Provider Statement: Provider is a licensed therapist and retired veteran who served as an Infantry Officer.  The therapist was previously diagnosed with PTSD and treated via the TFT modality more than six years ago. The provider later attended the Callahan Boot Camp Program in Nellysford, VA under the tutelage of Joanie Callahan. The provider is a contractor at a substance abuse clinic and incorporates TFT among the treatment modalities that are utilized in the clinic. The nature and profile of the clients he assists in treatment/counseling often present individuals that have suffered traumas not only from accidents but horrific physical and mental abuse. END_OF_DOCUMENT_TOKEN_TO_BE_REPLACED 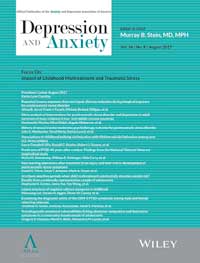 The first, a meta-analysis and systematic review, reviewed 36 psycho-social interventions for treating disaster trauma in children and adolescents. This review included a research study by Sakai, Connolly and Oas (2010) treating PTSD in child genocide survivors in Rwanda using Thought Field Therapy. Of the different interventions, the TFT study reported the largest pre- to post-treatment effect size. It was published in Psychological Medicine.

The second meta-analysis by Morina et al, reviewed research by Connolly and Sakai (2012) with genocide survivors in Rwanda. It was published in Depression and Anxiety.

​​​​​​​Thanks to ACEP member John Freedom for sharing this!

We are sharing this on behalf of one of our newest Algorithm Practitioners in the Middle East, Zena Nabil Hammami.  It is her first case study after completing her online algorithm certification course.

Just think what a difference it could make in the lives of children everywhere, and especially those living in the war-torn areas around our planet.

A friend of mine came to me to help her little son, he was 6 years and he was having a daily “Enuresis”, actually his mother used to put a baby diaper for him every night, she said that she took him to the doctor and after doing the medical tests, there seemed to be no clinical reason, his urinary system was ok!

I knew previously that the boy was having difficult times in the war here in Syria especially in his city, so I started to talk to the boy in  a lovely and kind way, I asked him about his most fears, and I understand that he was afraid to lose his mother as he lost his father (his father is a prisoner for years)  in the war, so his body is reacting in this way so he can gain more attention from his mother like a baby! So I started to begin the process with the: Algorithm of Fears “simple phobias”. END_OF_DOCUMENT_TOKEN_TO_BE_REPLACED

Jim Mc Aninch, TFT-ADV, TFT-RCT and Tom Greenhalgh made a presentation about clearing issues which troubled Veterans, Public Safety and Addicts in their struggles with recovery, entitled “They don’t Talk, Trust or Feel”.

911 dispatchers are a unique group, for they are the first responders. They are the first ones to connect with the individuals or groups with an emergency need. They must take the information, figure out the need and then relay that information to the proper responders with the correct location in seconds.  There is no room for error for they are dealing with life and death situations. Like the military and their special operation individuals; they are a challenging group to gain entry into.

With the development of CISM procedure and CISM teams working with the various responder groups, the value of this to the members was being recognized. Unfortunately the dispatchers we’re not included in these groups because they were not at the scene of the incident and it was felt that they were not affected by the event.

A number of years ago, I was called in to help with a crisis that had occurred within the northern zone of the Pittsburgh call center. On the northern zone’s weekend off, the team’s group leader/mentor was along with his wife killed in a tragic car crash. The crew members were unaware of the incident until reporting to work. The whole crew was impacted by the event and unable to safely work on the screens. The Chief Administrative Officer for Allegheny County requested immediate help from Pittsburgh’s CISM team. I was available and I went in to assess the need and give them what I was trained in regarding crisis intervention. I was able to educate them with regard to the possible effects of a critical incident but I also became aware that more was needed, to possibly find immediate relief.  I made the choice to integrate TFT into the crisis intervention work. I was able to stabilize thirteen dispatchers through one on ones and combinations in four hours which permitted them to safely return to work supporting the city of Pittsburgh. I immediately became the Chief’s designated 911 Center CISM representative ever since. END_OF_DOCUMENT_TOKEN_TO_BE_REPLACED

Listen to what the Rwandans are saying and doing to help heal their country from the devastation of genocide.  Fr. Augustin sent us this brief video.  Learn what they are doing to make sure it never happens again.  Take just a quick minute to see what they are doing and how you can help us continue this work.

We need your help to continue.  You can contribute from the foundation’s website:  www.TFTFoundation.org

Sponsored by the TFT Foundation and supported by the Nalaniikaleomana Foundation in Hawaii, Dr. Caroline Sakai and Cyndie and Gary Quinn went to Rwanda in September to help give more TFT trainings–and to support, however they could, the TFT IZERE Center, Byumba, and TFT Kigali. This included TFT trainings for the Rwandan Correctional System, part of the TFT Foundation’s new Rwandan Prison Project.

In order to expand TFT to all the prisons of Rwanda, which has been requested by the Rwandan General Commissioner of Corrections, funds are greatly needed. For more information about these efforts–and to help the foundation heal the hearts of Rwanda’s prisoners, their families, and prison staff–click on this link. Such a powerful way to contribute to World Peace.