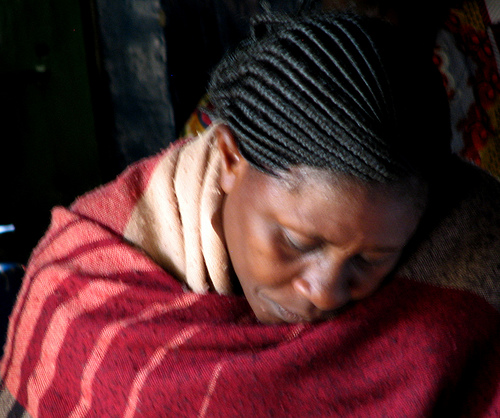 One older woman was hearing voices, as well as reliving the traumas and horrors of the genocide in a highly agitated state.  She was initially unable to focus, and she had a vacant yet frightened look.

She started gritting her teeth, looking around at the voices she was hearing that were threatening to kill her and her family, and talking back to the voices while rolling her eyes, or looking around at what she was experiencing internally, and waving her arms, stamping her feet on the ground, and tipping herself backwards on the bench she was sitting on.

At one point she spat as she yelled out while flailing her arms.  She stood up and was about to run away from the voices, when the psychological reversal and initiation of the trauma algorithm started getting her more grounded in the here and now.  She shook her head as she started to look directly and intently at the therapist and assisting support ATFT team therapist as if actually seeing them for the first time.

We then did a TFT diagnostic assessment, and the Rwandan therapist continued her treatment using the diagnostic treatment points.  Her agitation subsided, and she remained focused, and her body visibly relaxed, and the light went back on in her eyes.  The gritted teeth relaxed into a broad smile of release and relief.

The voices disappeared, and she remained in good eye contact and fully present.  She no longer went in and out of dissociation, and was not responding to compelling internal experiences.

Her only fear at the end of treatment when her subjective units of distress went from 10 plus to 0, was that it might come back again.  The treatment protocol was written in Kinyarwanda for her even though she could not read, since she lived with the surviving 7 of her 13 children, and a couple of them could read. She also was informed of the on-going TFT services that would be available twice a week at the Izere Center.

She stated with amazement that it was as if she had been lost far away, and she had come back to earth now.  She stated that it was now quiet in her head without the voices and painful flashbacks.  She no longer felt she was cursed, and her stabbing pains in her chest and stomach totally remitted.  She was elated and expressed her joy and gratitude for her experiencing release and relief.

Dr. Caroline Sakai describes how TFT brought profound relief to a Rwandan elder who endured severe emotional, mental, and physical suffering since seeing his family brutally murdered, himself attacked and left for dead–and how he responded by opening his modest home to local orphans!

Children in Rwanda who were orphaned by the genocide, AIDS and poverty comment on how TFT has relieved them of their suffering and changed their lives.